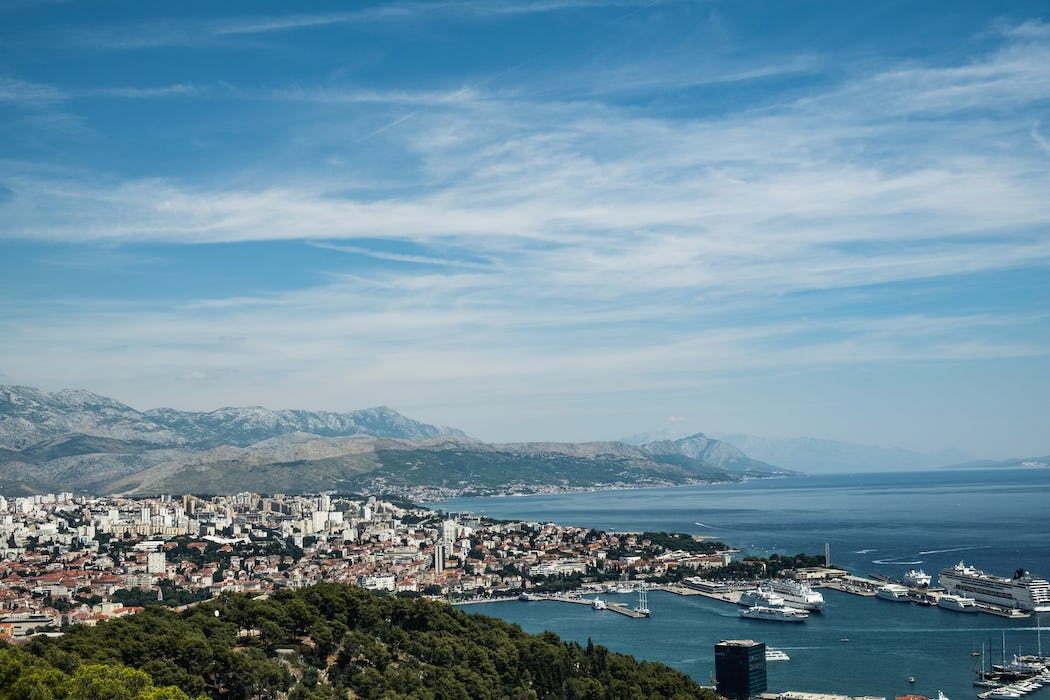 Our essential list of things to do in Split

The Old Town of Split is a maze of streets and lanes that surround Diocletian's Palace.

Narodni Trg, the heart of the Old Town, is filled with restaurants and cafes where you can enjoy your day and gaze upon the old town clock, a symbol of Split.

Diocletian Palace is one of the best preserved Roman monuments in the world. It was built as a combination of a villa, summer house and a Roman military camp. The Palace is a rectangular building with four large towers on each corner, doors on each of the four sides and four small towers on the walls. Over the centuries, the citizens of Split adapted parts of the palace to their needs. That's the reason the inside buildings as well as exterior walls have changed significantly since its original construction. The outlines of the Imperial Palace are nonetheless still very visible. You should explore the cellars of the palace and the Temple of Jupiter.

To get the best panoramic view of Split, you should definitely climb up St. Domnius Cathedral. The Cathedral of Saint Domnius, built at the turn of the 7th century AD, is regarded as the oldest catholic cathedral in the world that remains in use in its original structure. It is found inside the Emperor's Mausoleum. It became a cathedral in the 7th century where altars with relics of St Domnius and St Anastasius took an honorary place. The Cathedral today, when it's not attracting tourists, is used mostly as a place of liturgy and celebrations. St Dominus is Split's patron saint and is celebrated on the 7th of May. On that day the residents of Split go to the streets and walk around the town. Local custom says that you should take home anything made of wood, at least a spoon. The most famous part of the Cathedral are the gates carved in walnut by Andrija Buvina, also from Split. They are one of the best examples of Romanesque sculpture in Croatia. They were made by the Croatian sculptor and painter around the year 1220. Two wings of the Buvina wooden door contain 14 scenes from the life of Jesus Christ, separated by rich ornaments in wood. This 57 metre high Cathedral is something you definitely shouldn't miss. 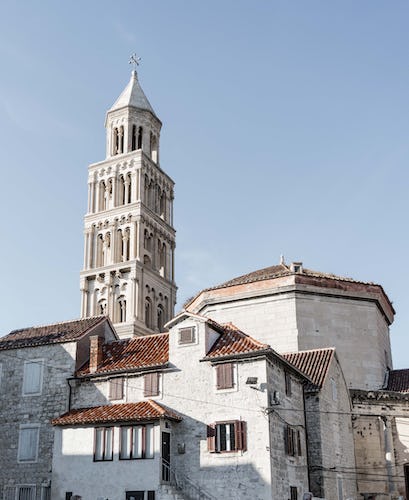 If you really want to feel like a true Splićanin/Splićanka, you have to take a walk on the Riva, have a coffee in one of many cafes and sit on the bench underneath the palm trees. Colorful buildings, the calm sea, and the view of the Mediterrenean will give you a feeling you will want to experience again.

This park-forest is the best option to get your heart racing. If you climb all the way to the top you can take a photo of the Croatian flag over the beautiful panoramic scenery of Split. You can rent a bike, go for a swim, a hike or just go for a coffee at the Bene beach or Prva Vidilica. A great thing to do with children is to go to Zoo park Marjan where you can find cows, horses, goats, chickens, and donkeys.

On the south side of Marjan you can enjoy the following beautiful beaches:

Dalmatian cuisine is known for its simplicity. Local recipes are passed between generations and defended with great pride. You can describe the cuisine using epithets like easily digested, low-fat, moderately spicy, and ‘boiled’ to perfection.

You should also know what konoba means. It is a word which usually describes a traditional Dalmatian restaurant. In the old days, konoba referred to a room in the house where food was prepared and stored, typically sea food or locally grown food. The lowest room in the house was always chosen as a konoba. Rooms on the ground floor or cellar with few windows and the most beautiful Dalmatian smells.

What you also shouldn't miss when in Split, is touching Grgur Ninski’s big toe. It is believed it gives you good luck. It is an iconic statue in Split created by the most famous Croatian sculptor, Ivan Meštrović. The sculptor spent a big part of his life in Split, and the Meštrović Gallery in the Old Town is a well-known gallery in which you can see his works and learn more about his life and career. Other than Grgur Ninski’s statue, make sure to admire the sculptures in the museum’s garden, which were also created by the same awesome artist. If you are an art lover, the Jaman Gallery in the Old Town is worth a visit as well. This is a pop art gallery with many colorful paintings by a local painter called Danijel Jaman. You can even find a little shop there where you can buy your art-inspired souvenirs.

Dubrovnik may be King's Landing, but Mereen and Braavos were all filmed in Split. In Diocletian’s Palace you can find Daenerys’ throne room, and in the basement is where Daenery’s dragons were kept. Papalićeva Street in Split became one of the streets seen in the slave rebellion scene.

One of the things Split residents are very proud of is Picigin – a sporting activity relatively unknown to the world and one truly unique to this city. The rules are very simple but it’s the spirit of the game that can only be experienced. So until you see or try the game yourselves at the famous Split beach Bačvice, you won’t know exactly what the game is about. You can see people playing it all year round even though it’s mostly a summer sport. In short, picigin is a collective game played in low waters, and partially on land. The number of players, as well as gender and age, are not strictly defined. As a rule, the players pass the ball with the stroke of the palm of a hand. The ball is 5-10 cm in diameter, and weighs 50-150g.  Constantly hitting they try to keep the ball in the air as long as they can, before it hits the sea or the land.

Revel in the sporting heritage

Relaxed and informal, Split residents are less interested in high culture than they are in sports and the outdoors. The local football team, HNK Hajduk Split, inspires almost fanatical devotion throughout the whole Dalmatian region and has produced world-class players such as Alen Boksić, Darijo Srna and Robert Jarni. On the tennis courts, Wimbledon champ Goran Ivanišević and his former protegé Mario Ančić are much beloved. On the basketball courts, Split created 7 players in the NBA. If you get lucky and Hajduk are playing at their famous Poljud stadium you should definitely consider going, the atmosphere and the adrenaline are not easy to describe.

Take a one day trip to Trogir

Trogir is a separate coastal city just 35 minutes away by car or bus and one hour by ferry. This is a tiny, but gorgeous town to visit. The entire Old Town is located on an island which you can tour in just an hour or two if you move quickly, but half-day or longer is ideal. The origin of the name Trogir dates back to the 2nd century BC. All variations of the name are related to different legends of the founding of the city. One such legends claims the antique name, Tragurion, is the name for an older Illyrian village meaning three stones in Albanian. It is based on a local story that Trogir was built on a foundation of three stones. Another explanation comes from the Greek words Tragos meaning goat and Oros meaning hill. The literal meaning was 'goat hill' and was related to nearby Kozjak mountain. During the first century BC Trogir got its Roman name Tragurium, and with the arrival of Slavic nations in the seventh century, it was changed to Trogir. You should, among other things, see the Trogir cathedral and Ćipiko palace. Ćipiko hired the biggest artists of the age, such as Nicola the Fiorentin, Andrija Alesi and Ivan Dunković to work on it.

View Split from the Klis fortress

Overlooking the city of Split, between Mosor and Kozjak mountains, lies the small village of Klis.  Famous for its vineyards and olive groves. At the center of this hillside village is a medieval fortress built into a rocky ridge giving visitors an incredible birds eye view of the entire Split “metropolitan” area, Adriatic Sea and surrounding islands. The Fortress of Klis (Tvrđava Klis) has a history of more than 2000 years, beginning with the Illyrian tribe called Dalmatae that used it as a stronghold before it was taken by the Romans. After the fall of the Roman Empire, the site became a seat for several Croatian kings.

Why you should visit the Kliss fortress:

If you need a new piece of clothing or you just want to go on a shopping spree, the City Center One and Mall of Split are the perfect place for you. You can go by car or by public transport. However, try not to get lost in there, the Mall of Split is the biggest mall in the region!

Sample the delights from some of our preferred restaurants and konobas in Split: 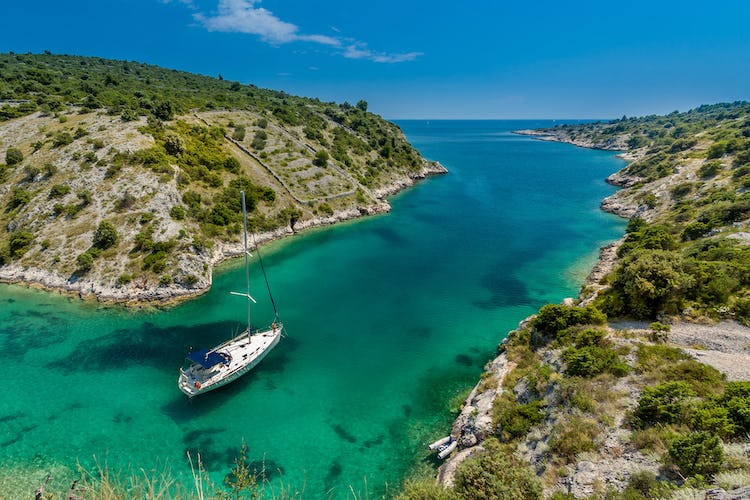 Boat sailing through a canyon in Trogir

The Port of Split was originally a trading post established by Greek settlers from the island of Vis and subsequently taken over by the Romans. The port thrived through the Middle Ages, but it suffered a decline in the late 18th and early 19th centuries when the Port of Rijeka took over as the primary trading and shipping outlet of the region. The decline was also attributed to the decline of the Ottoman Empire, a traditional market for the Port of Split, and the growing domination of Austrian Empire.

Where you should stay in Split

Split neighbourhoods to suit all needs

A handful of the best places you can stay in split are: