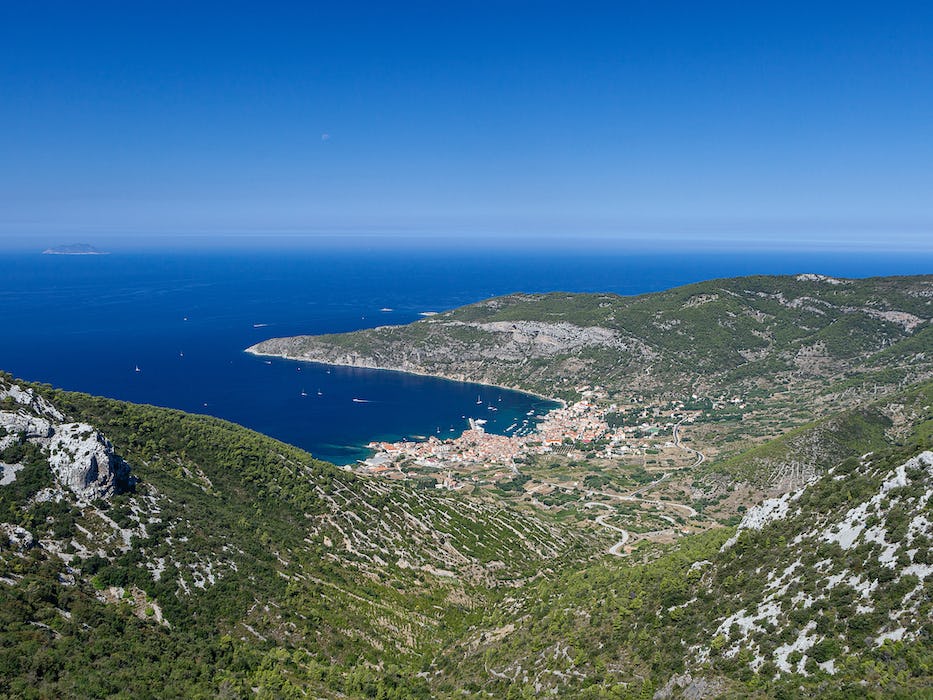 This charming island, famous for its fishing industry, boasts a rich history. The island originally got its name from the Greek settlers who founded a colony here in the 4th century BC and named it Issa. Following Greek rule on the island was succeeded by the ancient Romans, and then another dominant force in the Mediterranean, the Venetian Republic, ruled from the 15th century until the end of the 18th century. The local dialect also dates back to this time with its Venetian origin.

During the second half of the 20th century, the island was used as a Yugoslavian military base which saw the island isolated from all foreign visitors until 1989. However today Vis is a popular tourist destination, attracting visitors with its spectacular beaches, unspoiled nature and rich cultural history.

Why a Vis sailing trip is well worth it

The island of Vis is located in one of the most popular parts of the Adriatic, the Split Archipelago. The islands of Vis, Korčula, Brač, Hvar and Šolta are among the top summer destinations in Croatia and the preferred choices for sailing enthusiasts. Here you will find some of the best beaches in Croatia, unspoiled natural beauty and pristine blue sea. The island is home to some of the most beautiful beaches in Croatia, nestled in some truly spectacular locations.

The charming little towns of Vis and Komiža welcome visitors with their friendly atmosphere, beautiful architecture and quality seafood. If you have some time to spare then another popular destination for sailing enthusiasts visiting Vis is the nearby island of Biševo and the mesmerizing Blue cave.

Vis enjoys a warm, Mediterranean climate. While the winters can get wet and windy, summers on the island are warm and dry, with plenty of sunshine. The average temperature during the winter sits around 10°C while average temperatures during the summer months can reach above 30 °C. As the island is quite isolated geographically, winds tend to be stronger in the area. Those sailing will welcome the moderate western wind Mistral, which picks up in the afternoon during the summer. Stronger winds are one of the reasons Vis is a popular sailing destination. Be wary of Jugo (southern wind) and Bura (northern wind) which can bring bad weather. The island’s isolated location in the Adriatic means sea temperatures are often lower around the island, yet can still reach 25 °C during the summer.

Best time to sail in Vis

Due to its warm climate and fair weather, sailing on the island of Vis is possible from as early as late April up until October. Those looking to swim, snorkel and indulge in other water activities might prefer to visit the island during the summer months. True sailors will prefer May or September, with fewer distractions and traffic.

Despite being a popular tourist destination, crowds are much smaller here than on some other popular Croatian islands like Hvar or Brač. Numerous coves scattered along the island’s coast will ensure you find privacy even in the peak of the tourist season.

The two largest settlements on the island of Vis are the town of Vis on the island’s eastern side and the town of Komiža, located on its western coast. The interior of the island is quite hilly with the highest point of Hum standing at 587 metres above sea level, offering spectacular views of the surrounding area. In the centre of the island you will find lots of vineyards producing delicious local wine. The coast of Vis is very indented, housing some spectacular beaches like Stiniva and Stončica. 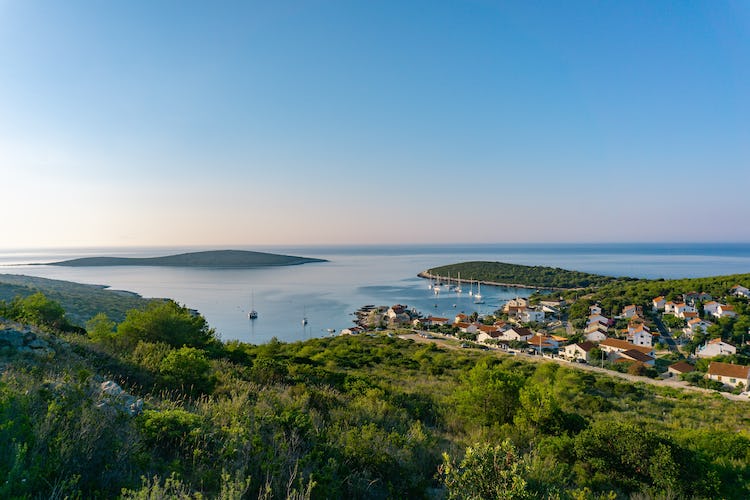 Looking out to the ocean from inland Vis

There are no marinas on Vis, but mooring is possible in the ports of Vis town and Komiža. There are two areas designated for mooring in Vis, with a total of 100 berths and depth of up to 4 m. The biggest and most popular mooring spot on the island is the Viška Luka Marina, located in the town of Vis on the northern shore. The port is located in the centre of the town, near numerous shops, restaurants and landmarks.

Mooring is also possible in the Komiža port, where you will find 30 available berths. If you don't manage to bag a berth, there are also designated buoys for smaller vessels located in the bay. The depth is up to 30 m here and the sea bed is mostly sandy.

Vis sailing - where to anchor

Vis is famous for its secluded coves and spectacular beaches. Due to good wind protection and water depths, anchoring is possible in almost all of them.

Uvala Knezice is a bay located west of Komiža, on the southern coast of the island. There is a beach located at the base of the bay with depths varying from 3 to 10 m. Keep in mind that the bay is exposed to the Mistral wind.

Luka Rogačić is located on the northern coast of the Vis, west from the town of Vis. You will find two bays here, Parja bay and the Rogačić bay, both offering adequate protection from the elements.

Stončica bay is a long and sandy bay, home to one of the most beautiful beaches on the Adriatic. Even though the bay faces northeast, there is still enough protection from most winds due to its shape. Stončica beach is a popular destination, and you will find several restaurants here.

Luka Rukavac is the biggest and the most protected bay on the southeast coast of Vis. Here you will find a small fishing village with a 20 m long concrete pier. Anchoring is possible anywhere in the bay, with the depth reaching up to 8 m.

Porat is a sandy bay located on the nearby island of Biševo. The bay faces southwest and offers good protection from all winds except Mistral. The sea is extremely shallow here, so make sure to maintain your distance from the shore when anchoring. The bay and its beach are an extremely popular sailing destination so be prepared for some traffic when visiting.

Prices for chartering a boat for a week of sailing around the island of Vis and its neighbouring islands depend on the time of year and type of vessel.

Those looking to avoid the high season and summer months will be able to charter a small sailboat for a week for as little as €700. Catamarans and motorboats will set you back around €1,000 during the months of May or September, whereas chartering the same vessel during the months of June, July and August could cost up to three times more. A week-long charter for a sailboat for around 8 people during the summer will cost upwards of €2,000. Be sure to check the available offers online as there are usually significant discounts for those booking the charter in advance.

If you want the most relaxed sailing experience, we recommended you hire a local skipper, which will cost you around €100 per day. When booking a charter, make sure to carefully read what is included in the price to avoid any surprises. Some additional fees like final cleaning or mooring fees are usually not included in the charter price.