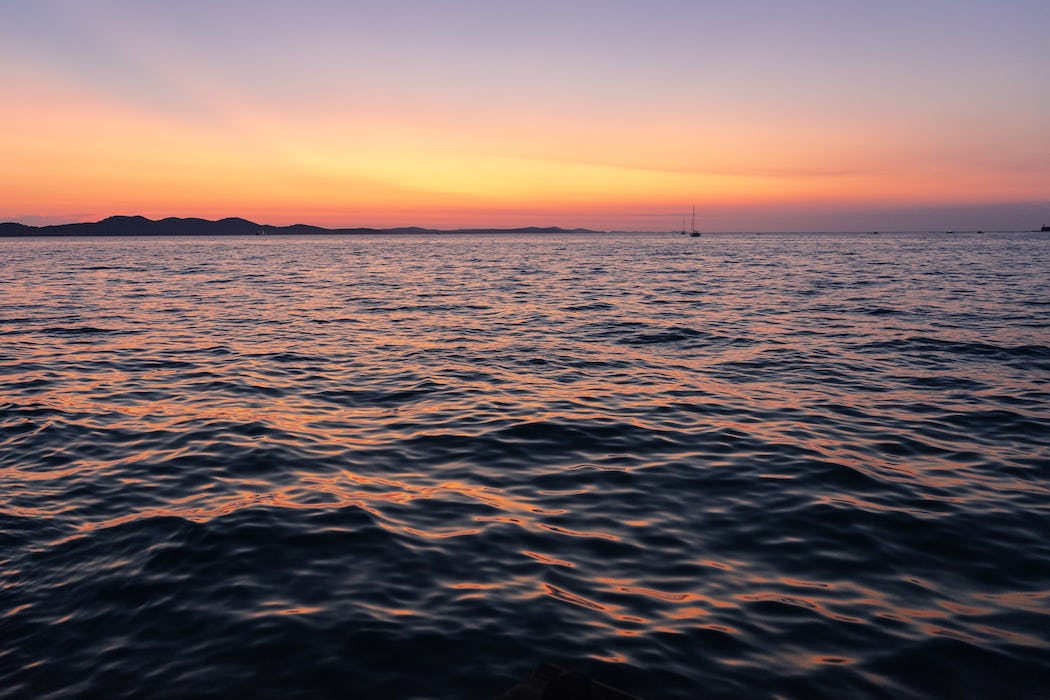 Zadar is a Croatian coastal city located in the region of Dalmatia. Zadar’s central location on the Croatian coast makes this historic city an ideal starting location for your sailing holiday. Before you set sail, take a day or two and explore this beautiful city on the Adriatic coast.

The city is heavily influenced by its previous rulers, first the Romans and later on the Venetian Republic. The well-preserved remains of the Roman Forum are a popular tourist attraction. Zadar was later heavily fortified during the rule of the Venitian Republic which led to the city being included on UNESCO’s World Heritage Site list as part of Venetian Works of Defence.

Today, Zadar attracts visitors with its rich cultural scene and numerous festivals and exhibitions. Recently-built art installations like the Sea organ or Sun Salutation transformed the city’s waterfront into a popular destination. Here you can enjoy the sounds of the sea while witnessing spectacular sunsets. As the night approaches, popular Zadar nightclubs, bars and restaurants eagerly await all looking for a good time.

The city of Zadar is divided into 22 neighbourhoods, with the most notable being the Old town of Zadar, Višnjik, Stanovi, Arbanasi, Plovanija, Bokanjac and Puntamika.

The Old town can be found on a peninsula and is the oldest part of Zadar, dating back to the ancient Romans. Here you will find narrow cobbled streets, a well preserved Roman Forum, several churches and the impressive fortifications built by the Venitian Republic. The Old town is a popular destination, attracting visitors to its architectural landmarks and to the waterfront, where you will find several art installations.

Zadar expanded throughout the years, adding new suburbs like Diklo and Borik to the northwest. Borik is located about 3 km from the city centre and is a lovely wooded area with plenty of beaches and fun activities. The ferry port was recently moved to Gaženica, located 3 km southeast from the city centre.

Why you should choose a Zadar sailing trip

Zadar sits close to many beautiful Croatian islands, most of them easily accessible by boat. The magical Kornati islands, one of the most popular sailing destinations in the Mediterranean, are a short sail away from Zadar. Islands like Uglajn, Pašman or Dugi Otok are rich with natural beauty with plenty of hidden coves, beautiful beaches and charming little towns. For those looking to get away from the crowds, smaller islands like Olib, Silba and Iž will provide needed tranquillity. Sailing enthusiasts will welcome the fair winds, short distances between destinations and lots of well-protected moorings and anchorages.

The climate in Zadar, similar to the rest of the Dalmatian region, is a typical Mediterranean climate. Winters here are mild and wet while the summers are hot and humid. Temperatures regularly exceed 30 °C during the summer months of June, July and August. The average sea temperatures sit around 25 °C during the summer. During hotter years, swimming season extends from May until the end of October.

Winds in the Zadar region are usually mild, making the area a top-rated destination for sailing enthusiasts. However, be wary of the strong northern wind, Bura, which can prove tricky to the inexperienced sailors. The mistral wind, on the other hand, will be your ally, blowing in the afternoon and creating a smooth sailing experience.

When is the best time to sail in Zadar

Due to warm weather and favourable winds, sailing around Zadar is best experienced from April until the end of October. The most popular times to visit are the summer months of July and August but keep in mind that marinas and bays can get quite crowded in that period. If you are looking for a more relaxed sailing holiday with fewer crowds, booking a trip in June or September may be the ideal time. 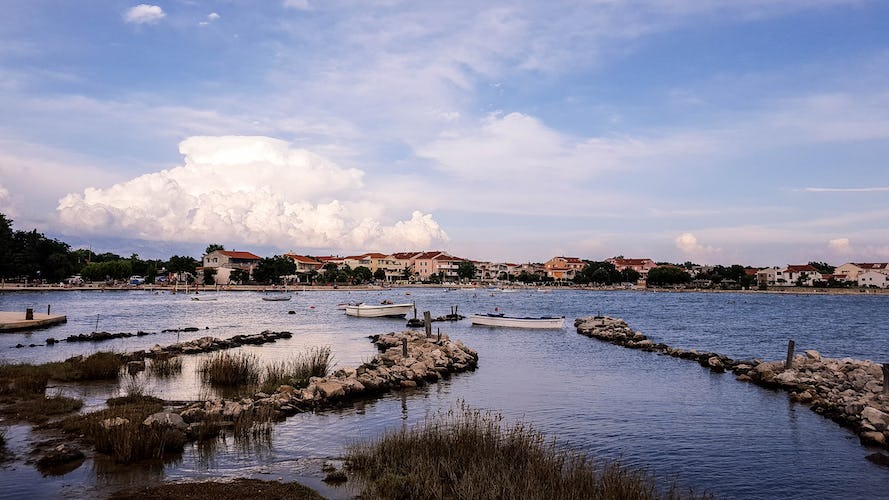 A wet dock in Zadar

There are a couple of marinas in the city of Zadar, all of the open all year round. Zadar’s location on the Adriatic and its proximity to famous Croatian islands make this city a perfect sailing destination.

Marina Zadar - is located in the city centre, in a protected bay opposite the peninsula where the Old town of Zadar sits. Marina Zadar has 300 berths, all with water and electricity, and an additional 150 dry berths. The marina also has a refuelling station, and there are several shopping centres in the vicinity. Marina Zadar is open all year round and can get crowded during the peak tourist season so consider making reservations before coming here.

Marina Borik - is a modern city marina located on the western coast of Zadar. It is nestled in a quiet bay near the hotel resort. The marina offers 185 berths on six piers and an additional 50 dry berths. You can also find a decent range of amenities including water and electricity for every berth, private parking, reception and several restaurants in the surrounding area. From here you can also enjoy a beautiful view of the city as well as the neighbouring island of Ugljan.

D-Marin Dalmacija - is a large modern marina located in the town of Sukošan, just 7 km south of Zadar and 5 km from Zadar Airport. With 1,200 berths and 300 dry berths, it is the largest marina in Croatia. The marina is a part of the D-Marin global marina network, which has marinas in countries like Greece, Turkey, Montenegro and the U.A.E. Here you can find a wide range of amenities, including a private beach and the exclusive Portus Beach Club with restaurants, a lounge bar and several shops.

Where should you anchor on your Zadar sailing holiday

The area around Zadar is popular among sailing enthusiasts for its beautiful islands and very indented coast, full of secluded coves. Zadar is one of the busiest cities on the Adriatic coast which makes anchoring in the city difficult but not impossible.

Located in the city of Zadar, Puntamika is a small bay just north of the Borik area and is a perfect spot for a shortstop and visit to the nearby beaches.

Ždrelac is a small town on the island of Pašman, located where the bridge connects the islands of Pašman and Ugljan. Be sure to pass slowly under the bridge and wave to the curious onlookers. Here you will find plenty of good spots for anchoring, as the sea is deep and clear.

The island of Molat is located in the northern part of the Zadar archipelago. Here you will find everything you need for a relaxing holiday, away from the crowds. There are several well-protected and peaceful coves like the Lučina, Studena and Zapuntel, perfect for sage anchoring.

Sakarun beach on the island of Dugi Otok is one of the most popular and beautiful beaches on the Croatian coast. This broad sandy beach offers gorgeous scenery and crystal clear sea. Anchoring is permitted at the buoys located along the bay. You can also find a couple of restaurants at the beach offering refreshments.

Vrulje bay is located on the eastern shore of the island of Kornat. You will find three restaurants there and even a small shop. Anchoring is permitted at the designated buoys or one of the restaurants, but it is reserved only for its guests.

Prices for chartering a boat around Zadar vary depending on the type of vessel and time of year. Summer months of June, July and August are the peaks of the tourist season in Croatia and charter prices usually double in that period.

Chartering a sailboat for 6 to 8 people for a week during the summer months will cost you more than €2,000. However, due to a warm climate and favourable weather conditions, sailing is also possible in early May and all through September. Chartering a sailboat in that period will be significantly cheaper with the prices starting around €1,000 for a week of sailing.

Catamarans and motorboats will be somewhat pricier as the price for a one-week charter starts anywhere from €3,000. During the peak tourist season, charter prices for bigger yachts and catamarans can exceed €10,000 for a week of sailing.

For less experienced sailors and those wanting a more relaxed sailing holiday, you may want to hire a local skipper, which will cost you around €50 per day. Keep in mind that there are several additional costs not included in the listed prices, such as mooring fees and transit log (cleaning service).