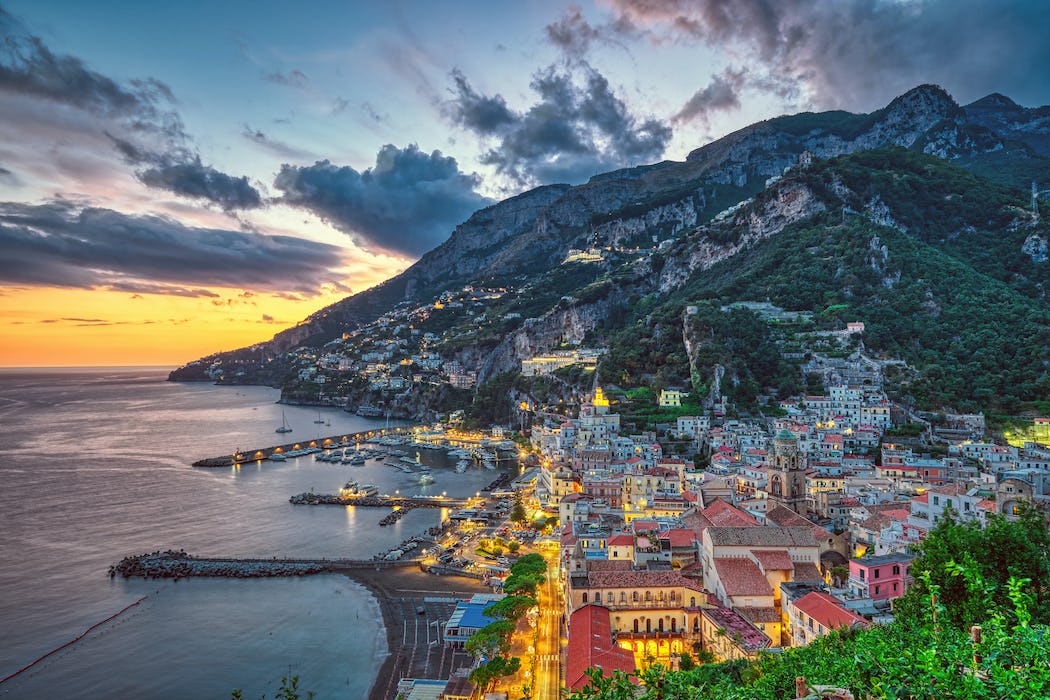 The Mediterranean country of Italy is located in the southern part of central Europe, occupying the boot-shaped Apennine Peninsula. Italy’s geography varies from the snow-covered peaks of the Alps mountain range in the north to the sunny shores of the island of Sicily in the south. Including the two biggest islands on the Mediterranean, Sardinia and Sicily, Italy has over 7,500 km of coastline on the Adriatic, Ionian and Tyrrhenian sea.

Due to its location in central Europe, Italy was home to many ancient tribes and empires throughout its rich history, none more famous and influential than the Romans. The Roman Empire conquered most of Europe and, at one point in the 2nd century, the Empire spanned from Scotland to India. At the peak of its power, during the 200 years of Pax Romana, Rome was the leading cultural, political and religious centre of Europe. Before the Empire collapsed in the 5th century, Roman ingenuity ensured groundbreaking development in law, technology, architecture, economy and art.

Italy continued ununified through the ages, with several city-states and maritime republics, such as Venice, prospering through trade, commerce and banking. The Renaissance period, which originated in Italy, saw brilliant artists create some of the most famous pieces of art in human history.

Today, the Italian capital of Rome serves as a time capsule, presenting the wonders of Italian history to millions of curious tourists.

Italy is the fifth most visited country in the world, well known for its cultural and tourist attractions. Italy is home to 55 different UNESCO World Heritage Sites, the most of any country in the world. The geographical diversity of the country makes Italy a perfect holiday destination all year. In the winter you can enjoy some of the Alps most popular destinations in one of the many Italian ski resorts. Historical cities like Rome, Venice, Florence or Milan attract millions of culture-seeking tourists year-round. The south of Italy is filled with picturesque little villages overlooking the beautiful blue sea, awaiting the visiting sailing enthusiast. The Amalfi coast or the islands of Sardinia and Sicily are ideal destinations for a summer holiday, offering plenty of sunshine and beautiful beaches.

Best things to do and places to explore in Italy

Italy attracts millions of tourists each year to its majestic cities and spectacular coastline. Rome is one of the most visited cities in Europe and seeing the Colosseum, the Forum or the Vatican should be on everyone’s bucket list.

Wine tasting in Tuscany is a cliche that must be experienced, and so is the Gondola ride through the canals of Venice. Italian cuisine is world-famous, and sampling delicious local dishes is one of the must-dos when you visit. South of Italy offers spectacular coastline and plenty of sunshine, perfect for sailing holidays.

Some of Italy’s most famous destinations:

The Italian capital of Rome is one of the most exciting cities you can visit with 3,000 years of history worth exploring. Rome’s entire historic centre has been classified as the UNESCO World Heritage Site. Seeing the Roman Colosseum, the Roman Forum or the Pantheon will make you understand why. Architecture seen in Rome spans centuries and is representative of what the greatest minds in human history were capable of. Rome is filled with squares, often homes to beautiful fountains, like The Trevi Fountain, which attracts large crowds of visitors. A visit to one of many museums in the city will guide you to the beautiful art that originated here. The papal enclave of the Vatican, located within the city, and St.Peter’s Basilica should be seen by all, regardless of religious beliefs. Rome is nicknamed the “eternal city” and visiting the cobbled streets filled with history will make you understand why they used to say that “all roads lead to Rome”.

Located in the Lombardy region in northern Italy, Milan is the second-largest city in Italy after Rome. Milan is a city rich with history, culture and impressive architecture. Here you will find spectacular military fortifications (Sforza Castle), cultural landmarks (La Scala opera house) and imposing churches (Milan Cathedral). Today, Milan is one of the biggest industrial and economic centres in Italy and Europe. The city is most famous for its fashion industry and is considered to be one of the fashion capitals of the world.

Naples sits south of Rome and is the capital of the Campania region. This historic coastal city, located in the vicinity of the Mount Vesuvius volcano, is the third-largest city in Italy after Rome and Milan. The historic city centre has been designated as a UNESCO World Heritage Site and is the largest of its kind in Europe. Naples and its surroundings are home to a wide range of culturally and historically significant sites, like the Palace of Caserta and Castel Nuovo. The Roman ruins of Pompeii and Herculaneum, famously affected by the Mount Vesuvius eruption in 79 AD attract large numbers of visitors each year. Naples is also world-famous for its cuisine, most notably the pizza which originated in this city.

Sicily, located south of the Italian peninsula, is the largest island in the Mediterranean. The island is dominated by the imposing Mount Etna, the tallest active volcano in Europe, currently 3,329 m high. The island has typical Mediterranean weather and is a popular summer destination. Like the rest of Italy, the island is filled with important archaeological and ancient sites, telling us of the islands’ rich history. The biggest and most notable cities on the island of Sicily include Palermo, Catania, Messina and Syracuse. 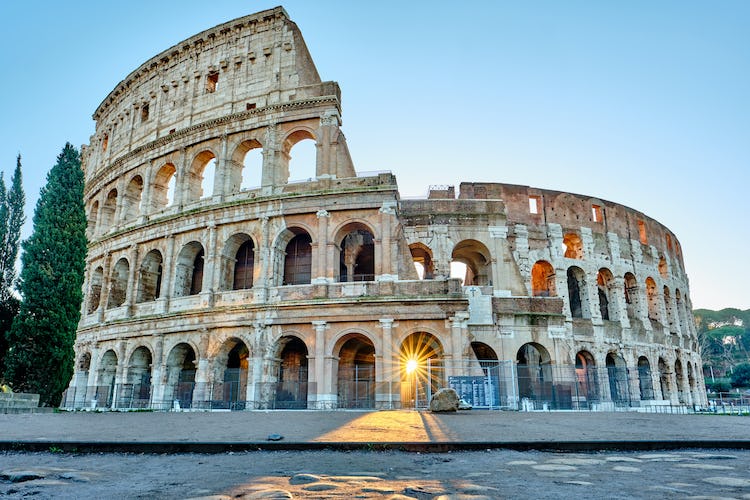 The Colosseum of Rome

Florence sits in central Italy and is the capital of the region of Tuscany. Even though Florence was founded as a Roman settlement, the city started to prosper during the medieval ages. In the period between the 14th and 15th century Florence was politically, economically, and culturally one of the most important cities in Europe. Florence was home to the influential Medici family and is the birthplace of Italian Renaissance. The Uffizi Gallery is one of the most visited and significant museums in Italy, housing several priceless collections of Renaissance art. The region of Tuscany is world-famous for its wine and food, making Florence an ideal destination for a culinary-themed vacation.

Venice is a historical coastal city that quite literally sits on the Adriatic. The city spans across a group of almost 120 small islands, separated by canals and linked by more than 400 bridges. Known for its mighty naval power and economic and trade prowess, the Venetian Republic ruled the Mediterranean for centuries. Its maritime expansion and prosperous trade meant Venice was able to focus on art and culture. The Carnival of Venice is also a must. It is held every year and is most famous for its distinctive masks. World-famous for its canals and unique architecture, Venice is one of the most popular travel destinations in Europe.

Sardinia is the Mediterranean’s second-largest island, second only to another Italian gem, Sicily. The island sits west of the Italian Peninsula and immediately south of the French island of Corsica. Sardinia has a diverse landscape, varying from mountains and thick woods to the rocky coast and beautiful long sandy beaches. Thanks to those spectacular beaches and crystal clear sea, Sardinia sees plenty of visitors each summer.

Discover some of the best beaches in Italy

With over 7,500 km of coastline, Italy is home to some spectacular and pristine beaches. The islands of Sardinia and Sicily or the Amalfi coast attract large crowds of visitors during the summer.

Located in the town of Tropea, Marasusa Beach, known as the “Jewel of Calabria”, is home to scenic cliffs, clean white sand, and calm waters. Here you can explore the old town of Tropea and enjoy Italian specialities in local restaurants.

Located on the Amalfi coast, Marina Grande Beach is one of the most picturesque beaches in Italy thanks to the imposing cliffs surrounding the beach. This 300 m long beach attracts large crowds of tourists each summer, enjoying the food and the views of the nearby restaurants and taverns.

The natural beauty and warm waters are what attracts visitors to this fantastic beach on the southern coast of Sardinia. There are plenty of activities to enjoy at this beach like kayaking, paddle boarding and snorkelling. Beachfront bars and restaurants at Spiaggia di Tuerredda offer plenty of refreshment after spending a day under the sun.

Spiaggia dei Conigli sits in a bay encircled by rocky slopes and untouched nature. The beach is located in a nature reserve on the remote island of Lampedusa south of Sicily. Although it gets crowded during the day, the beach closes in the evenings to allow the loggerhead turtles to return and lay their eggs in the warm sand. Snorkelling and diving enthusiasts will enjoy exploring the rich world hiding beneath the surface of the pristine, turquoise sea.

Camogli is a small coastal town near Milan, located on the Italian Riviera. Here you will find a popular pebble beach, offering plenty of water activities. Make sure to stick around until the sunset and enjoy a beautiful dance of colours as the sun paints the whole coast as it parts. There are restaurants and bars located on the beach, open long into the night.

Forte dei Marmi is a small coastal town in Tuscany, not far from Florence. The long, sandy beach is a popular summer destination for both the locals and tourists. Here you will find plenty of nightclubs, bars and restaurants offering ample entertainment to last you through the night.

Make the most of the lovely summer weather in Italy

Due to its diverse geography and elongated shape, there are several different climates present in Italy. The northern part of the county has a continental climate, with cold winters and warm summers. Most of the south, including the islands of Sicily and Sardinia, as well as the coastal regions of Liguria and Tuscany, have a typical Mediterranean climate. Those regions have mild winters and dry, hot summers with lots of sunny days. Northern and central areas of Italy experience occasional thunderstorms from spring to autumn while summers in the southern regions tend to be hot and humid, with less rainfall. Average summer temperatures vary from 15 °C near the Alps in the north to over 25 °C on the island of Sicily.

Italy is one of the founding members of the European Union, and its official currency is the Euro. Italy introduced the Euro into circulation in 1999 when it replaced the previous national currency, the Italian lira.