The undiscovered gem of Procida

Located off the coast of Naples in southern Italy, Procida is a magical little island, full of stunning natural beauty and yet unaffected by mass tourism. This winning combination makes visiting the island a truly relaxing experience, with the island charming its visitors at every opportunity.

The island of Procida is a part of the Phlegrean Islands, an archipelago in the Gulf of Naples, situated between the island of Ischia and Cape Miseno on the Italian mainland. Procida is a small island, volcanic in origin, with a surface area of only 4 square kilometres and 16 kilometres of coastline in total.

The history of the island is closely tied to the nearby city of Naples. The island was under the jurisdiction of the Duke of Naples following the fall of the Western Roman Empire. During that period, the island faced several invasions by the Vandals, Goths and later the Saracens, leading to the fortification of the island. The most famous rulers of the island were the Da Procida family, who ruled the island for over two centuries, up until the end of the 14th century. The island reached its height at the end of the 18th century, when King Charles III made Procida a royal game reserve, while the local shipbuilding was at an all-time high. Following the Napoleonic Wars and the fall of the Kingdom of the Two Sicilies, Procida became a part of the newly-formed Kingdom of Italy.

In the second half of the 20th century, tourism replaced shipbuilding as the island’s primary industry. Procida also caught the eye of Hollywood, leading to several famous movies filmed on and around the island. Movies like Cleopatra, The Postman and The Talented Mr. Ripley were all filmed in Procida, only adding to the charm and charisma of this pocket-sized island. 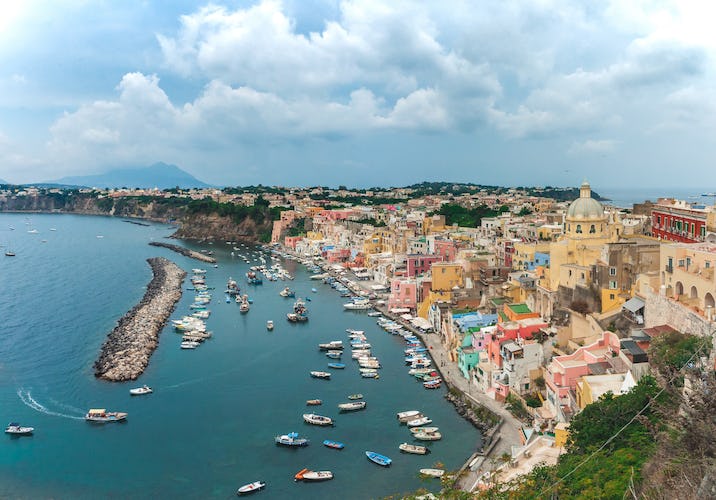 As there is no mass tourism present on the island of Procida, accommodation options here are wonderfully quaint and authentic. There are a couple of smaller hotels scattered around the island and also several B&Bs offering a peaceful atmosphere and an unspoiled insight into the local life.

The Solcalante hotel is a small 12-room hotel surrounded by greenery, located very near the famous Il Postino and Ciraccio beaches. Guests can enjoy the wellness centre inside the hotel consisting of a small SPA area, complete with a chromotherapy whirlpool bath and the Finnish sauna. Additionally, there is also a wide selection of massages and beauty treatments offered to the guests.

Be sure to visit the hotel-based Acqua Pazza restaurant, ideal for sampling the local delicacies and Italian specialities, all prepared with locally farmed ingredients.

La Suite is a stylish boutique hotel that combines luxury, design and comfort to create a unique experience. The hotel offers 22 individually designed rooms, each equipped with extensive amenities. Stepping outside their rooms, guests can enjoy visiting the SPA & fitness areas, lounging by the large outdoor swimming pool or a delicious meal in the elegant hotel restaurant - “Bouganville”.

La Suite, nestled in lush greenery, offers spectacular views of the island and the sea with the hotel just a few minutes away from the Ciraccio and Il Postino beaches.

This apartment building dates back to the 1700s and is located in Via Flavio Gioia, one of the oldest streets on the island. The street connects the centre of the island with some of the main destinations like Punta Serra, Ciraccio and Piazza Olmo.

Guests can choose between several apartments, each of them equipped with air conditioning, satellite TV, and fully stocked kitchens.

Il Leone di Mare is a small B&B, tucked away among the lush greenery, close to the beaches of Chiaiolella bay. Guests can enjoy modern and comfortable rooms, decorated to pay homage to the various movies that were filmed on the island. Rooms also come with free WiFi, TV, a minibar and are pet-friendly.

Located in the historical centre of Procida, Villa Mazzella offers six wonderfully charming rooms, all with different views of the town. All rooms are equipped with free WiFi, a TV, air conditioning and a minibar. Perfectly positioned in the centre of the island, reaching the most popular attractions like Terra Murata or Marina Corricella is only a short walk away. Guests can enjoy a rich breakfast, served in the beautiful hotel garden, immersed in greenery.

Procida beaches - as seen on TV

Beaches on the island of Procida are some of the most beautiful and famous beaches in the whole of Italy. The beauty of Procida coast was featured in movies like the Postman or The Talented Mr Ripley, adding to their charm and allure. As the island of Procida is so small, visiting all the beaches is easily achievable no matter where you are staying.

Located in the south of Italy, near the city of Naples, the small island of Procida enjoys a typical Mediterranean climate, with mild winters and hot summers. During the summer, air temperature regularly reaches 30 °C, with sea temperatures in August reaching 26 °C, creating ideal conditions for a summer holiday. Most of the rainfall on the island occurs during the winter while summers tend to be dry. There are plenty of sunny days throughout the summer, for a total of 206 sunny days a year.

The best time to visit the island of Procida is anytime between May and October when you will have warm weather and very little rainfall. If you are looking to do some sightseeing or hiking, spring or early autumn are the perfect time of year as you will avoid the heat of the summer. The best period for a swim and other water activities in Procida is definitely during the summer, in July and August. Visiting in that period, you will be greeted by warm temperature - varying between 25°C and 30°C with little to no rainfall.

Where to go out in Procida

Even though the island of Procida is much less renowned for its nightlife than the nearby island of Capri, there are still several bars and clubs on the island, offering entertainment and dancing long into the night. 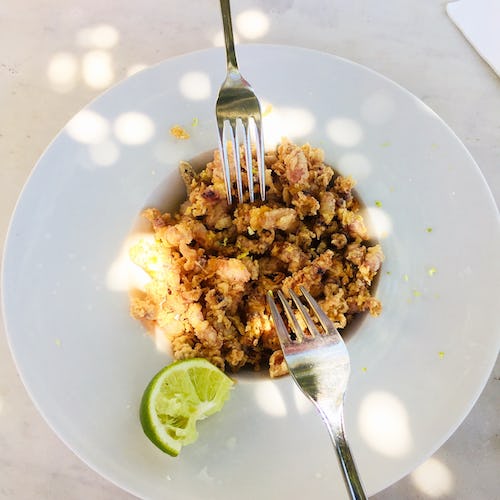 Across the island of Procida, you will find numerous restaurants, most of them offering delicious local seafood and finger-licking good Italian specialities. Here are just some of the more popular restaurants on the island, with plenty more left for you to discover.

Sailing the Gulf of Napoli and visiting the islands of Procida, Ischia and Capri attracts numerous sailing enthusiasts each year. Here are some of the most popular and best-equipped marinas on the island of Procida, offering safe harbour when visiting here.