Salerno Destination Guide - The Gateway To The Amalfi Coast

The coastal town of Salerno, situated southeast of the city of Naples, near the mouth of the Irno River on the Gulf of Salerno, is a place of rich history and the ideal starting point for exploring the stunning Amalfi coast.

The city dates back to the Roman colony of Salernum, founded in 197 BC on the site of an old Etruscan town called Irnthi. Throughout history, Salerno has retained its status as an important port on the Tyrrhenian Sea.

Salerno prospered greatly during the Middle Ages, under the rule of the Lombard Dukes, and became a renowned centre of medical studies through its prestigious medical school, which remains active to the present day.

The city of Salerno also played an important role during WWII, as it was the site of the invasion of Allied forces during Operation Avalanche. Following the capitulation of fascist Italy in 1943, the King of Italy Victor Emmanuel III moved from Rome to Salerno, making it the home of the “government of the South” and the provisional government seat for six months. Today, Salerno is one of the busiest domestic ports, acting as an industrial and commercial hub for the south of Italy.

The winning combination of beautiful landmarks and lush walkways

Visiting Salerno, you are greeted by imposing architecture of various styles, beautiful gardens and a gorgeous promenade. Landmarks such as Salerno Cathedral and the Forte la Carnale offer an impressive amount of history, art and relics to discover, while the historic old town centre provides a perfect setting to explore the city and enjoy this coastal paradise. The proximity to the stunning and renowned Amalfi coast also make Salerno one of the top summer destinations.

A walk through the Rione Duomo district will enable you to best experience the local culture and vibrant nightlife. Here you will also find several important buildings like the Duomo, Villa Comunale and the Provinciale Archaeological museum.

The Salerno Cathedral, also known as the Duomo, has been a symbol of the city since the 11th century. This majestic building is dedicated to its patron saint, Saint Matthew, and displays a Romanesque style featuring a beautiful front facade with delicate arches.

The church is dominated by the 56 m high bell tower that sits at the rear of the cathedral displaying decorative artwork in both Arabic and Norman style.

The interior of the church displays various religious artefacts dedicated to Saint Matthew, including the crypt which is said to hold the remains of the Saint.

Located in close proximity to the Salerno harbour, in the heart of the historic old town, you will find the stunning landscaped garden that is Villa Comunale di Salerno.

The garden was designed in the 19th century and was built on the site of the old town hall.

Here you can enjoy a relaxed walk among exotic trees and lush vegetation and visit several beautiful statues of important figures in local history like Giovanni Nicotera, Carlo Piscane and Clemente Mauro.

Trieste Lungomare is a beautiful, one-kilometre long promenade, stretching from Piazza della Liberta through to Porto Turistico. This tranquil walkway, covered with palm trees offering plenty of shade, is a perfect destination for a stroll any time of the day. There are also several charming piazzas (squares) along the way, complete with fountains and statues.

Standing on top of a hill and overlooking the city of Salerno is Forte La Carnale, the 16th-century castle that protected the city against Saracene raids. Visiting the fort you will be greeted with fantastic views of the city and the Amalfi coast.

Today, the castle hosts numerous exhibitions and cultural displays portraying the history of the fortification and the city of Salerno.

The nearby Amalfi coast is one of the most popular summer destinations in Italy, considered to be one of the most beautiful stretches of coastal landscape in the country.

The Amalfi cost is the perfect destination for a day trip as it offers plenty of beautiful beaches, picturesque towns and historical sites like the Duomo di Amalfi, the Shrine of Saint Andrew and the Chiostro del Paradiso.

You will find the small town of Amalfi nestled on the side of the cliffs, a two-hour drive to the west of Salerno. 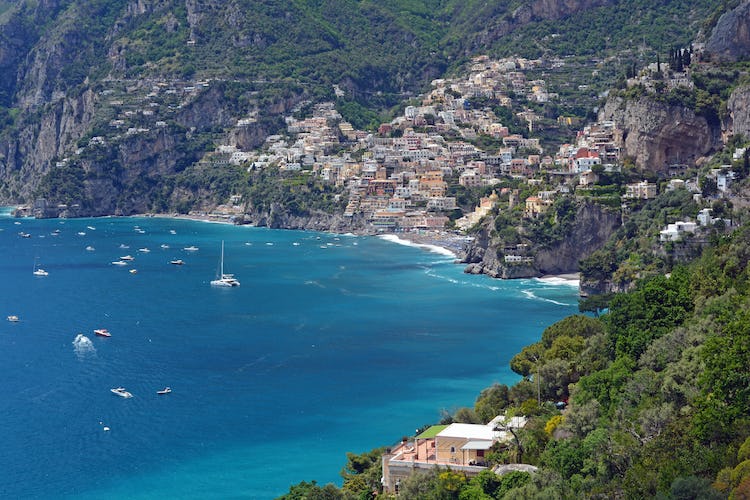 Beautiful stretch along the Amalfi Coast

Wake up to the stunning views of the Amalfi coast

When choosing a place to stay in Salerno, you will have two options: staying in the historic old town or the newer part of town, away from the city centre. Staying in the old town offers picturesque surroundings, closer to the main attractions but offers fewer accommodation options and is further away from the train station and ferry port. On the other hand, if you book a hotel in the newer part of town, you will be closer to transportation but further away from the main attractions in town.

Hotels and B&Bs in the old town

Hotels outside the city centre 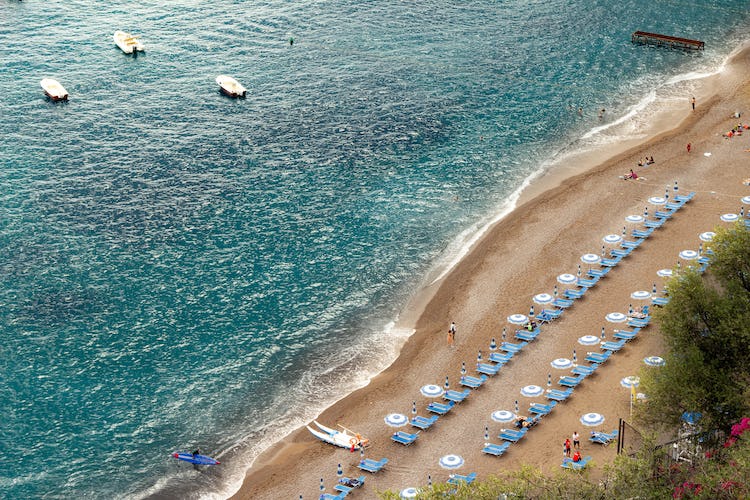 Beach with deckchairs in Positano

Despite being a big city with a large port, Salerno still offers several beaches where one can cool off and take a dip in the Tyrrhenian Sea. However, to fully experience the beauty of the Amalfi coast, you should head west out of the city towards the small town of Amalfi.

The Italian city of Salerno enjoys a moderate Mediterranean climate with mild and rainy winters and warm and dry summers. The winter months are much rainier with November being the wettest month. During the summer there is significantly less precipitation with July the driest month of the year.

Average annual temperature in Salerno is 16.°C, with January and July being the coldest and warmest months respectively.

Salerno sits on the coast of the Tyrrhenian Sea, and the annual average sea temperature here is 19.5 °C. In August, the sea temperature can reach over 26 °C, making this part of the Italian coast an ideal destination for a summer vacation.

The best time to visit Salerno is sometime between spring and late autumn. Visiting during the summer is best suited for those looking to visit the beaches and enjoy the water activities. If you are looking to do some sightseeing and hiking, the best time for a visit is in late spring or early autumn, when the weather is not too hot, and there are fewer crowds. 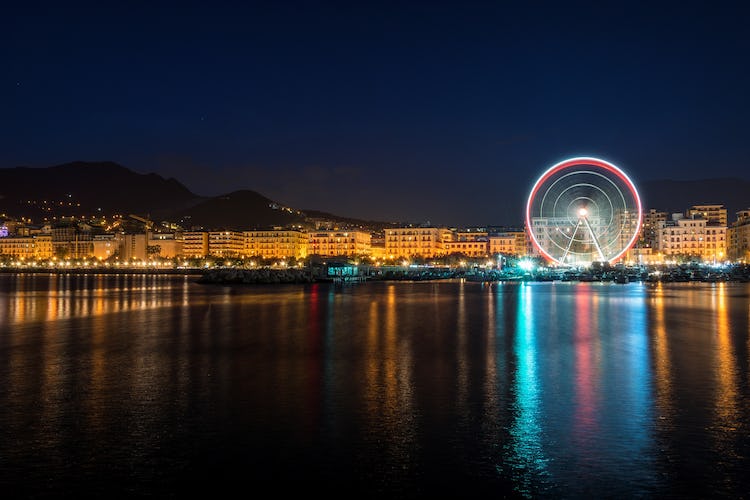 View of Salerno by night

Party the night away in Salerno

Salerno is a vibrant university town and a major harbour that has a lively nightlife and cultural scene. There is a wide selection of clubs, discos, and cafes for you to choose from, located both in the old town centre and in the newer parts of town. Here are some of the more popular places to grab a drink or dance the night away.

Restaurants are aplenty in the city of Salerno, offering the very best Italian cuisine has to offer. There are restaurants located all across the city, but the best and the most popular ones can be found in the old town centre. 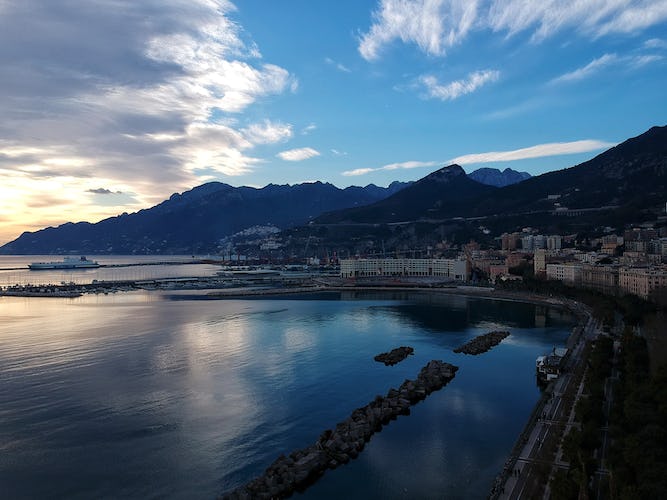 Salerno port from a distance

Salerno is one of the busiest domestic ports in Italy and the transport hub for the southern part of the country. Sailing enthusiasts use it as a base to explore the Amalfi coast and south of Italy. There are several large marinas located in and around the city of Salerno with a couple of major ones listed below.