Long gone are the times when Croatia was considered an unknown and exotic tourist destination. Each summer, millions of tourists from all over Europe flock to this Mediterranean country in search of a relaxing vacation. As Croatia is relatively small, the number of visitors can transform the coastline and its islands into a rather crowded place, making it increasingly difficult to enjoy the breathtaking beauty of Croatia’s beaches and sea.

However, among nearly 1,000 Croatian islands, there are still a couple of them left untouched by mass tourism where one can enjoy a peaceful holiday, devoid of huge crowds.

Starting in the northernmost part of the Croatian coast, in Istria, we will make our way down south towards Dubrovnik and introduce you to some lesser-known islands along the way, offering untouched natural beauty and pristine sea, ideal for a peaceful visit.

Located in the Medulin archipelago, the island of Levan belongs to a cluster of 11 small uninhabited islands, offering crystal clear sea and charming pebble and sandy beaches. This tiny island, with a coastline of about 1 km, is located very close to the Istria coast, not far from the town of Medulin. Despite its small size, visitors will find plenty of things to do here. Swimming, snorkelling and other water activities are a given, while those looking for some refreshment can enjoy the beach bar and the Marea restaurant, offering delicious seafood. The Marea restaurant even organises weddings on the island, offering a luxurious setting including a boat transfer, delicious Istrian food and wine as well as charming rooms for its guests.

The island of Sveti Grgur (St. George), situated between the islands of Rab, Prvić and Goli otok, is one of the greenest islands on the Adriatic. The lush island vegetation supports grazing of sheep from the nearby island of Rab, as well as large herds of deer roaming through the island freely. As you approach the island, you will immediately notice some abandoned buildings, a part of the women’s prison that was located here during the Yugoslavian rule. The combination of thick forests, diverse wildlife and several abandoned complexes, makes exploring the island of Sveti Grgur a worthwhile experience. Furthermore, as you sail to the island, you will be greeted with beautiful coves, unspoiled beaches, and the general ambience of untouched nature.

The small island of Susak, located just west of the island of Lošinj, is unique in Croatia as it is almost entirely sandy. The island’s name derives from the Greek word for oregano, which you will find aplenty on this intoxicating island. Although the island is populated, you will find no roads here, only soft sandy trails that sprawl across the island, often engulfed by sweet-smelling shrubs. The beaches across the island are ideal for families and especially little ones as they offer warm and calm waters and soft sand.

You will find a couple of restaurants and bars in the village of Susak, where you can enjoy local seafood in the most tranquil of surroundings. As the sun starts to set, be sure to take a hike to the nearby lighthouse overlooking the island and surrounding sea and enjoy the vistas! 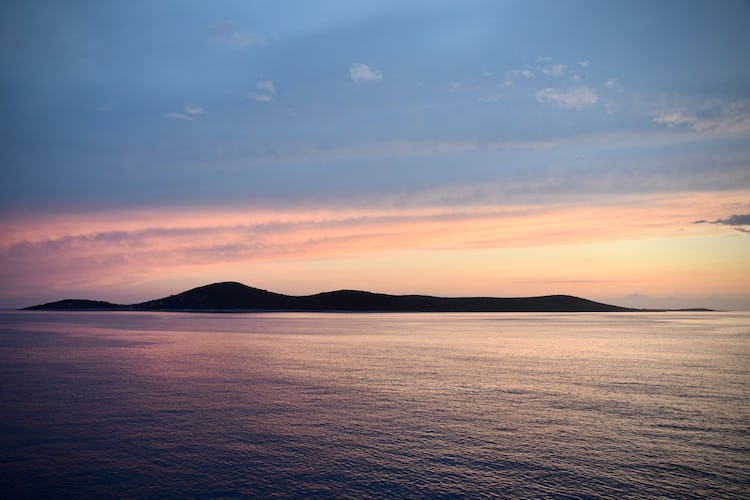 Similar to Susak, the island of Silba is another car-free island, where you can enjoy the laid back atmosphere and get lost in the numerous peaceful coves spread across the island. Sailing north from Zadar, it will take you just under two hours to find this Mediterranean oasis.

The most interesting attraction on the island is the Toreta, a panoramic viewing tower that stands in the middle of the island and offers spectacular views.

Silba is ideal for enjoying summer activities like sunbathing, swimming and snorkelling. At the same time, those looking for even more action can visit the Sotorišce beach and test your skills on the beach volleyball courts.

Setting foot on this small and peaceful Dalmatian island you wouldn’t think that the island shares a connection with one of the most famous music bands of the 1990s - Nirvana. Krist Novoselic, the bass player and one of the founding members of the legendary Seattle-based grunge band Nirvana, has roots on this island and spent many summers here when he was a boy. His parents, both Croatian immigrants that met in Seattle, regularly visited Iž before finally moving back to live here.

Tucked away between the islands of Ugljan and Dugi Otok, the island of Iž is yet another secluded oasis boasting untouched natural surroundings and pristine emerald sea. Despite having only two settlements on the island, Mali and Veli Iž, visitors will find everything they need in Veli Iž: a ferry port with a small marina, a hotel, a camp as well as a couple of shops, restaurants and bars.

The island of Iž is surrounded by dozens of small islands and islets, ideal for the visiting sailing enthusiasts eager to explore. On the southern end of the island, near the Školjić islet, you will find the Vodenja Mooring Buoy Field - a secure mooring spot that even offers a pizza delivery service!

Get lost in the bays of Kaprije

The secluded island of Kaprije, located in the Šibenik archipelago, is the namesake of the Italian island of Capri, both of which were named after the caper bush plant. Everyday life for some 150 residents of the island is mostly relaxed, devoid of mass tourism and crowds. Except for the fire truck of the local fire station, you will find no cars on this charming island - the best indication of its tranquil surroundings. The settlement of Kaprije is located in a large bay, offering safe moorings for those sailing here. There are around 20 bays and coves scattered around the island, making Kaprije an ideal destination if you are craving some peace, away from the crowds. The beaches here vary from sandy to pebble, but the sea is the same everywhere on the island - clean, calm and extremely inviting!

Located just 8 NM southwest from the historical town of Trogir, the island of Drvenik Veliki is the perfect getaway spot when visiting Dalmatia. Here you will find a singular settlement, with no more than 150 residents going about their day, not giving much thought to the outside world. Sailing around the island, you will be met with numerous coves, housing sandy and pebble beaches, ideal for anchoring and spending the day basking in the sun and the refreshing sea. Although there isn’t much organised tourism on the island, several bays on the island attract plenty of sailing enthusiasts, most notably Solinska bay on the southern coast and the famous Blue Lagoon on the east side of the island. The large bay in which the village of Drvenik Veliki is located offers safe mooring, while a stroll through the village enables you to visit several 16th-century attractions like the church of St. George and the summer villas owned by the Moretti and Tironi families.

Situated just south of the Dalmatian island of Vis is the tiny island of Biševo, the farthest inhabited island from the Croatian mainland. The small island, famous for its stunning cave of Modra Špilja (Blue Cave), is located just 5 NM south of the town of Komiža on the island of Vis, and is a popular excursion destination. The famous Blue Cave is located on the eastern coast of the island and can only be accessed at a specific time, when the tides are just right. According to some sources, there are as much as 26 sea caves around the island, often hidden in secluded coves.

Today, there are only a dozen permanent residents left on Biševo, which is a significant drop from some 200 people that used to live here following World War II. Due to its isolated position and located closer to cooler waters, the sea around the island is beaming with life: dolphins, sea turtles and schools of enormous tuna fish are a common sight in these parts.

The island offers spectacular sandy beaches, like the popular Porat beach on the western side of the island, tucked away in a long and protected bay. The island interior is an untouched oasis of lush vegetation, perfect for hiking and exploring. 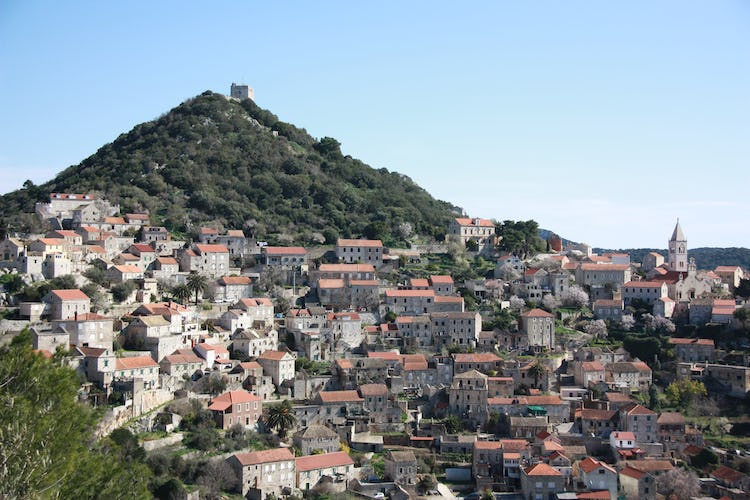 Only 10 NM south of the island of Korčula, you will find one of the most beautiful Dalmatian islands and the epitome of a secluded Croatian island - Lastovo. Surrounded by approximately 46 islets and small islands, Lastovo is a dream come true for all sailing enthusiasts that come here.

Located farther away from the mainland, the waters around Lastovo are crystal clear and a little bit colder than the rest of Croatian coast, housing a rich sea world beneath.

White rocky shores are shaded by pine trees, providing all the necessary protection from the sun, leaving you to enjoy your summer activities.

Almost 70 % of the island is forested, making it the most forested island in Croatia, alongside Mljet. That is why the whole island was declared a Nature Park by the Republic of Croatia in 2007.

Lastovo is also a place of rich history and culture, with the island dominated by Venetian architecture dating back to the 15th and 16th century. You will find plenty of cultural heritage sites as well as numerous small churches scattered across the island.

As the sun sets, make sure to look up and enjoy the exploding canvas that is the night sky. Away from big cities and without any light pollution, stars shine extra bright on Lastovo, making stargazing extremely satisfying.

The Croatian city of Dubrovnik is a well-known tourist destination and one of the most visited cities on the Mediterranean. The famous city walls and the old town centre can get quite crowded during the summer, which can be off-putting to some visitors. Situated just northwest of the city Dubrovnik, the island of Lopud is the peaceful and secluded oasis that will provide a much-needed escape. Lopud sits between the islands of Šipan and Koločep, the only inhabited islands in the Elafiti island chain. Two large bays dominate this small and charming island, Lopud and Šunj, positioned at opposite sides of the island and connected by a beautiful valley.

The village of Lopud is located on the northwestern part of the island and acts as a testament to the once-booming community.
Under the rule of the Dubrovnik Republic in the 15th and 16th century, the island had over 1,000 residents and a powerful shipbuilding industry. There are a total of 36 churches and chapels scattered around the island, as well as monasteries built by Franciscan and Dominican monks.

Although there are several sandy beaches on the northern side of the island, the main attraction on Lopud is the bay of Šunj, located on the southern coast.

Here you will find a horseshoe-shaped bay with a narrow entrance, housing a beautiful beach with white sand and shallow waters. An ideal spot for casting anchor and spending the day with your loved ones under the warm summer sun.

If you wish to feel truly at home, stop at the nearby beach bar and enjoy the views with a glass of cold beer.