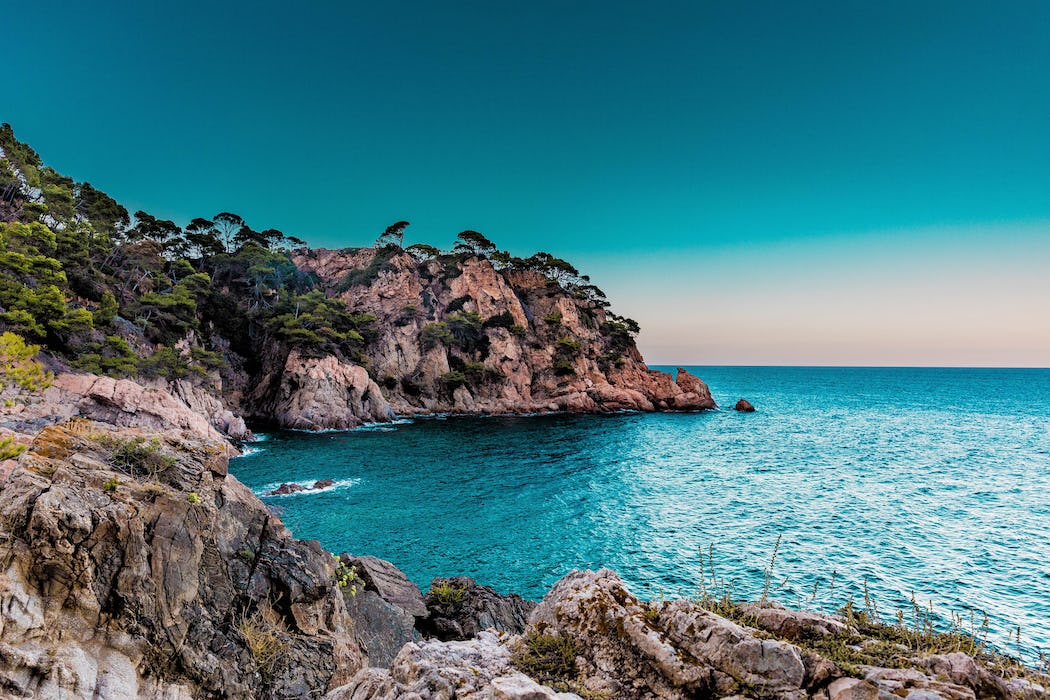 "I would sooner be a foreigner in Spain than in most countries. How easy it is to make friends in Spain!" – George Orwell

Spain is the home of the siesta, and the epitome of the casual way of living, inviting everyone to explore and enjoy its natural and cultural beauty.

Passionate, sophisticated and devoted to living the good life, Spain is equally a stereotype come to life and one of the more unique countries you'll ever visit!

This diverse country shares the Iberian Peninsula with Portugal at the western end of the Mediterranean Sea and borders France to the north, past the Pyrenees mountain chain.

Due to its geographical position at the western end of the European continent, Spain was always a meeting point of different cultures and one of the first places to connect the Old World (Europe) with the New World (Americas).

Due to proximity to the African continent, Spain was heavily influenced by nations outside of Europe, especially in the south. 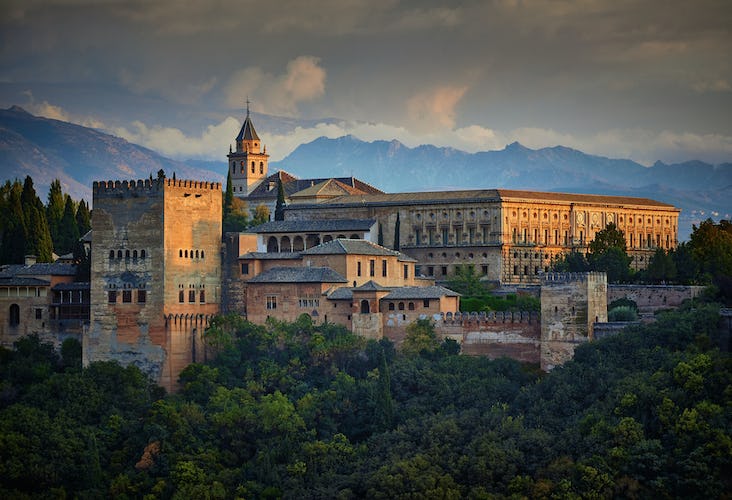 Today's Spain is a cultural cauldron, combining influences from all over Europe, including the Romans, Arabs, Galicians, and many more.

Similar to other Mediterranean countries, Rome made a significant impact on the Iberian Peninsula, bringing its language, infrastructure, and architecture to these parts.

The best indicator of how much Rome assimilated Spain is that some of the most successful and famous Roman emperors like Trajan, Hadrian, and Marcus Aurelius were Spanish.

Another nation that left a significant impact on Spain was The Moors.

They ruled over portions of Spain for nearly 800 years and left a legacy of architecture, poetry, and science.

Luxurious palaces like Alhambra in Granada are a testament to the power and wealth the Arab tribes had in the south of Spain.

By the end of the 15th century, the Moors were banished from Spanish lands. Over the next 300 years, Spain focused heavily on exploration and transformed into a colonial powerhouse, becoming one of the wealthiest countries in the world.

Explorers and conquerors travelled the world, claiming huge territories for the Spanish crown.

Besides the famous discovery of the North American continent, the Spanish expanded their dominion to Central and South America, Africa and Asia.

This rapid expansion led to several conflicts with other European nations, most notably the French and the English, throughout the 18th and 19th century.

With the steady reduction in empire size during that period, Spain was all but forgotten in world affairs by the start of the 20th century.

Following the conclusion of the Spanish Civil War (1936–39), the country further withdrew from Europe's focus during the four decades of rule by dictator Francisco Franco.

After Franco died in 1975, Spain became a constitutional monarchy, with King Juan Carlos on the throne.

Spanish summer holiday - there is nothing better! 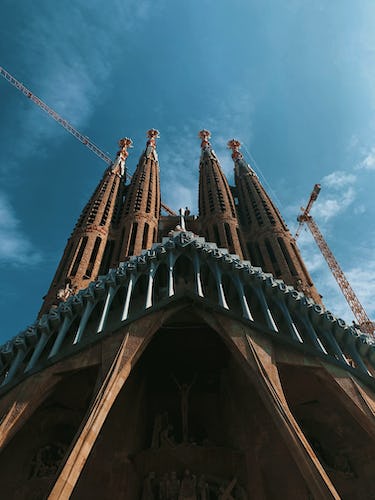 A view up of La Sagrada Familia

Spain is the country with the third-largest number of UNESCO World Heritage Sites, only behind Italy and China.

From its magical cities, stunning coastline and diverse interior, Spain offers attractions that will last you a lifetime!

The contrast between the snow-capped mountains found in the interior and the sun-coated coast creates ample vacation opportunities, perfectly suited for all kinds of activities.

On the other hand, Spanish cities are both modern and wonderfully rustic at the same time. Impressive palaces, stunning monuments and extravagant churches await you on every step.

Be sure to take a siesta and rest up because nightlife in Spanish cities starts very late and goes on long into the night.

An endless stream of must-see locations 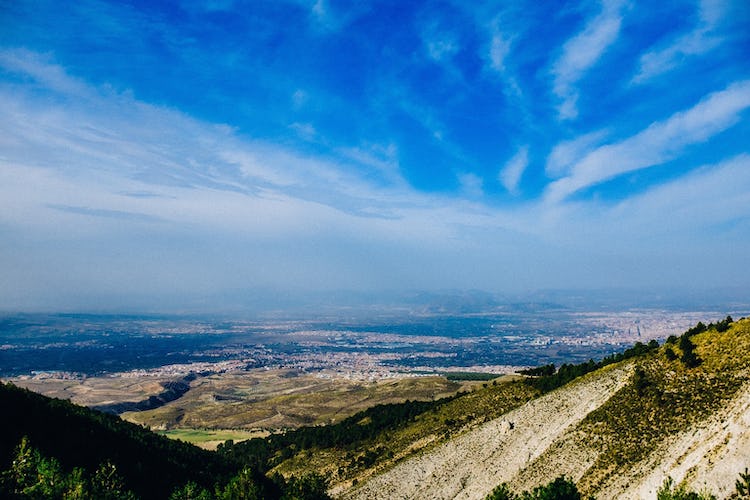 View from the Sierra Nevada

Spain offers one of the most diverse landscapes you can imagine.

Massive mountain ranges like the Pyrenees and the Picos de Europa are truly breathtaking, while the snow-capped Sierra Nevada towering above the plains of Andalucía is a sight to behold.

On the other hand, the Spanish Mediterranean coast is typically peaceful and charming, with endless beaches touching the emerald sea. 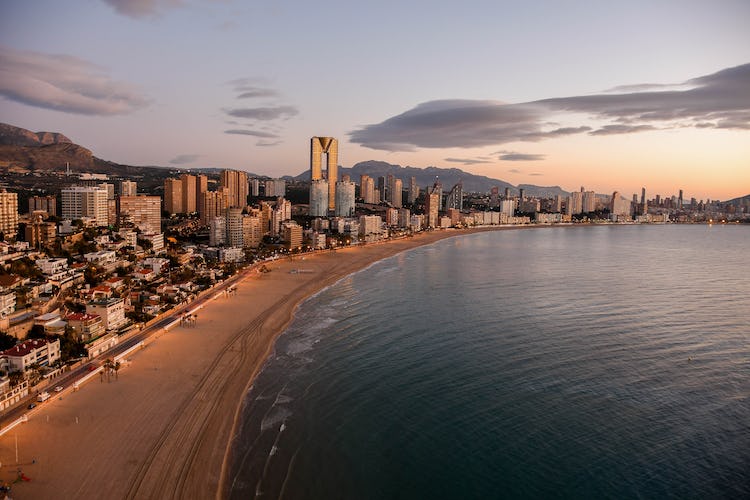 Away from the countryside, Spanish cities are among the most beautiful and intriguing cities in Europe.

Barcelona, Madrid, Seville, Granada, and almost any other Spanish city is bursting with life, full of spectacular architecture and rich cultural heritage with a vibrant nightlife. 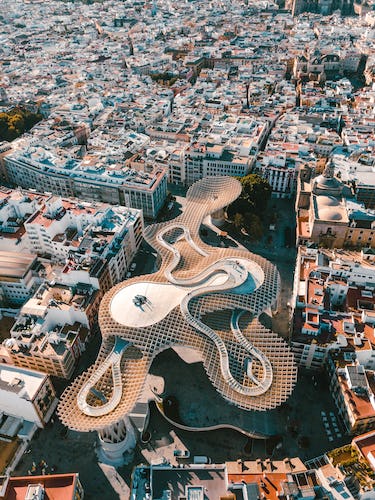 Those seeking more privacy can explore the quaint and charming villages scattered all along the coast and interior. 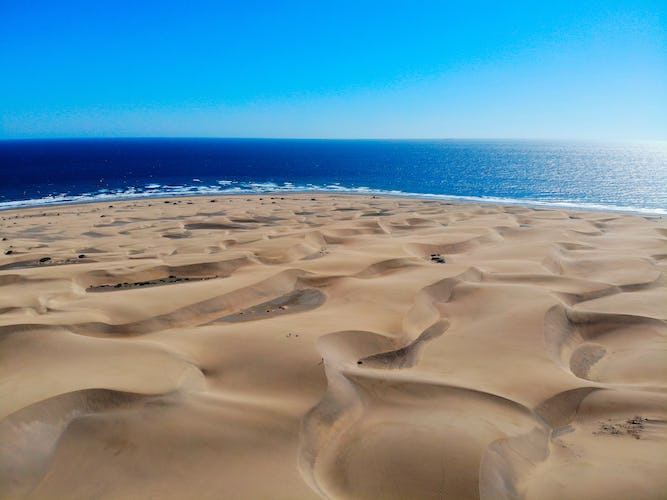 Maspalomas Dunes on the Canary Islands

Madrid is the capital city of Spain and the largest city in the country, with more than 3 million people living here. This beautiful city is home to some stunning monuments, including the Royal Palace and the Plaza Mayor.

Those interested in art will revel in visiting museums like Del Prado, Reina Sofia or Thyssen and seeing some of the most fantastic collections of famous Spanish painters like Velazquez, Goya, Picasso or Miro.

However, Madrid is most attractive after dark when its endless bars, cafes, restaurants and taverns explode with domestic and foreign visitors, indulging in the delicious Spanish cuisine and accompanying drinks long into the night.

Home to the stunning La Sagrada Famiglia, Barcelona is a marvel of urban architecture and one of Europe's most alluring destinations.

You can spend days wandering the Catalyunian capital, exploring parts of the city like the Gothic quarter, marvelling at Gaudi's masterpieces or soaking up the sun on the sandy beaches.

Barcelona also parties at night with numerous nightclubs, cocktail bars and eateries at the ready throughout the night.

Seville is one of those quintessential Spanish cities, where things like flamenco, bullfighting and baroque art evolved and became things Spain is famous for.

Located in the south of Spain, not far from the Strait of Gibraltar, Seville is the capital of the Andalusian region.

Seville lies on the River Guadalquivir that connects to the Gulf of Cadiz and is the only Spanish city with a river harbour.

The city is blessed with plenty of sunshine and warm weather almost year-round.

This makes the city ideal for exploring on foot and visiting the most important landmarks like the Cathedral of Saint Mary of the See, Torre del Oro, Alcázar gardens, Metropol Parasol, Triana Bridge and Plaza de España.

Granada sits at the foot of the Sierra Nevada mountains, halfway between Murcia and Seville.

The city is most famous for the magnificent Alhambra palace complex, the most renowned Islamic historical legacy building.

Alhambra is a true monument to Moorish legacy in Spain, an intriguing palace complex and a fortress depicting some of the finest craftsmanship of the Arab world.

Granada is also a well-known university city within Spain, with the University of Granada educating 82,000 students spread across five different campuses in the city.

This makes the city vibrant and youthful, with plenty of activities and festivals year-round.

The Balearic Islands is an archipelago located near the eastern coast of the Iberian Peninsula, in the western Mediterranean Sea.

The four largest islands are Mallorca, Menorca, Ibiza, and Formentera and are among the most popular summer vacation destinations in Spain.

A typical Mediterranean climate will greet you when visiting the islands, which, combined with beautiful beaches and the most inviting sea, makes the islands an ideal summer destination.

Mallorca and Ibiza are also known as international party destinations, attracting many of the world's most popular DJs and artists to their nightclubs.

The Canary Islands is a Spanish archipelago in the Atlantic Ocean, located at their closest point some 100 kilometres west of Morocco.

Due to their subtropical climate, the islands have excellent weather year-round, making them a popular vacation destination, especially during the winter.

An abundance of warm weather, sand beaches, lush vegetation, and many seaside resorts create an ideal tropical setting that many seek to enjoy each year.

The Asturian Coast is a magical stretch of coast in northwestern Spain, in the province of Asturias. There are more than 600 beaches in this part of Spain by some counts, creating a beautiful backdrop for an unforgettable vacation. 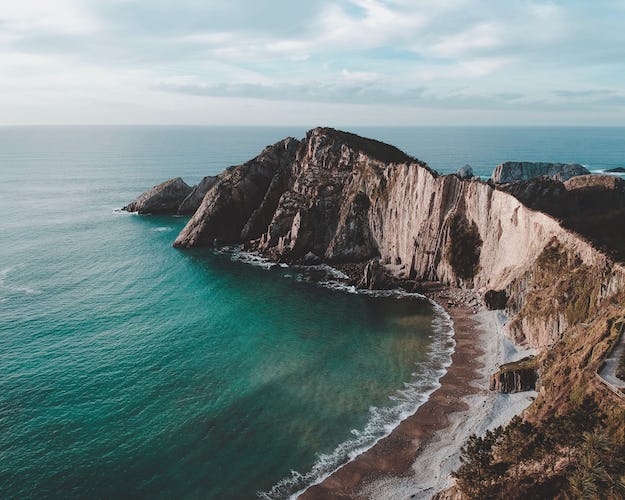 Playa del Silencio in the region of Asturias

People tend to visit the Asturian Coast, not for the water activities and sunbathing but more to explore the charming villages and towns settled here and indulge in the local culinary delights.

Due to its location on the Atlantic Ocean, the Asturian Coast sees plenty of rainfall and significantly less sunshine when compared to the rest of Spain.

The most popular beaches in Spain

There are more than 3,000 miles of coastline within Spain, with plenty of beautiful beaches to choose from.

Even though some coastal regions like the Costa Blanca or the Costa del Sol are more popular during the summer, one can find a suitable beach almost anywhere on the Spanish coast.

Located in the Basque city of San Sebastian, La Concha is considered to be one of the best city beaches in all of Europe.

Here you will find fine golden sand, sweeping views of the bay, and a beautiful white promenade, an ideal place to hang out and enjoy the summer's day.

Situated in the rugged region of Asturias, Playa del Silencio is one of the most stunning locations in this part of Spain.

Although the weather in this part of the country may not be as pleasant and calm compared to the south of Spain, Playa del Silencio still attracts plenty of visitors.

Nearby cities of Cudillero and Gijon are ideal places to stay and explore the beauty of this northern region.

Just a short drive from the capital of Catalunya, Sitges is a well-known gay destination in Spain and also known for its nudist beaches.

Ideal for those looking for a day-trip from Barcelona, Sitges offers plenty of summer activities and attractions.

The Costa del Sol in Andalusia is one of the most popular summer destinations in Spain.

Just east of Malaga, Nerja is a typical picturesque village with a sensational coast and stunning beaches.

The nearby town of Motril is another place worth visiting when in the area, as it offers new insight into the local way of living.

Unlike nearby Benidorm, Gandia beach is more popular with local residents, making it ideal for those looking for a more relaxed, local atmosphere.

If you are looking to party it up, the nearby island of Ibiza can be easily reached by boat or ferry.

One of the southernmost Spanish beaches, Maspalomas beach, is located on the southern tip of the island of Gran Canaria in the Canary Islands archipelago.

It is especially appealing to watch the sunset beneath Maspalomas lighthouse, overlooking the open sea towards the African continent. 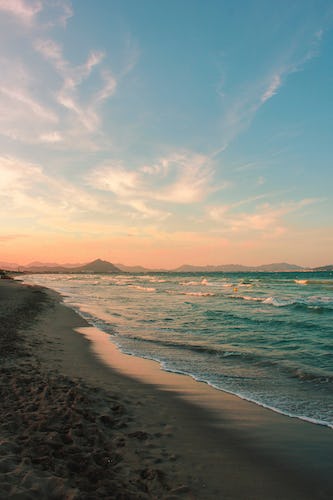 Sunrise on the beach on Mallorca

Spain is one of Europe's warmest and sunniest countries throughout the year, with its mild climate shaped by its location between the Atlantic and the Mediterranean.

Spanish weather is not so much influenced by the time of year as it is by the geographical location.

Northern sections can be cold and rainy in the middle of summer, while the Canaries stay warm and sunny almost throughout the year.

In general, the north of Spain is home to milder summers and wet, chilly winters, while the southern regions are quite the opposite: scorching hot summers are a given, while winters tend to be generally quite pleasant.

The Spanish Mediterranean coast and the Balearic Islands enjoy a typical Mediterranean climate and calm seas, making this part of Spain the most popular summer and sailing destination.

Average temperatures in Spain are somewhat higher than in the rest of Europe, with specific areas like Andalusia among the hottest regions in all of Europe. 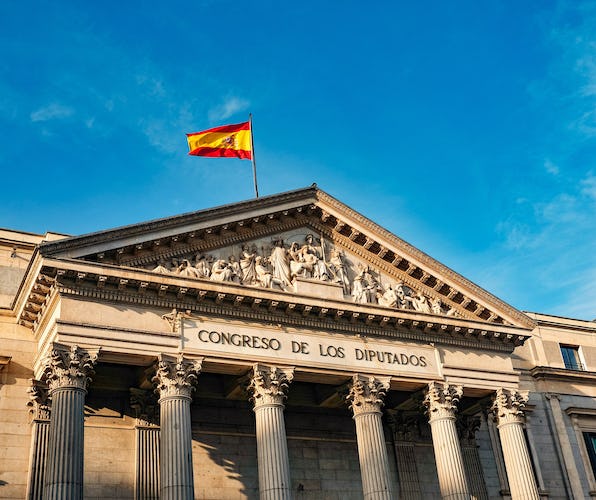